Aside from being known for its rich history, Taal, Batangas has a wide variety of foods and crafts that Taaleños (people of Taal) are really proud of.

Upon visiting Taal, Batangas, be sure to experience tasting their native products such as:

Empanada – It consists of ground pork with potato and carrots wrapped in a soft and delicious crust is considered to be one of the best-tasting versions of this Filipino version of the pocket sandwich. 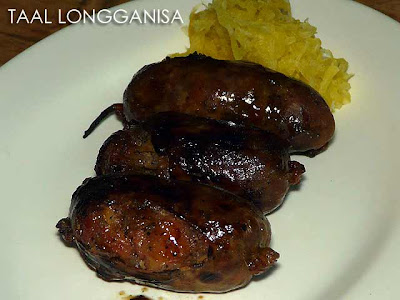 Longganisa has a distinct taste from being marinated in secret ingredients. The meat is flavored with adobo marinade and garlic. The meat is not finely-ground and contains chunks of fat. It is slightly salty and would fall into the deredaco garlicky (or mabawang) category. This can only be bought at the Taal market.

Aside from bulalo, lomi, and kapeng barako which Batangas is known for, there’s another must-try when you head down here in the province – the tapang Taal.

Usually, when you hear the word tapa, you would think of beef. But in Taal, their tapa is pork marinated in soy sauce with garlic and calamansi. Last week, I had tapang Taal for three straight meals. It’s best paired with fried rice and kapeng barako. Have it dipped in vinegar with onions and chilis. Yummy!

The best thing about having a delicacy or a dish that became a best-seller is the opportunity for the locals to have it as their own livelihood. There are lots of Taal locals selling this tapa and eventually they have been gaining frequent patrons from other neighboring towns and even from other provinces.

Panutsa – It’s Batangas version of peanut brittle – made of caramelized brown sugar and whole peanuts. This sugar-loaded delicacy will surely give you enough dose for a sweet fixation. It may sound common, but Taaleños boast that their peanut varieties are tastier. It comes in different sizes, most commonly in the size of an 8 inch plate.

Suman or rice cake – This is wrapped in banana leaves is also something one should not miss. They say what makes it extra tasty is the fact that it was mixed for several hours in order to achieve a desired consistency.

The suman salehiya which is made of boiled sticky rice is a perfect merienda specially when eaten with tsokolate brewed from tableyang-taal, the distinct chocolate ball ground from cacao mixed with brown sugar.

Burdang Taal (Barong Embroidery) refers to the long tradition of hand embroidery since the turn of the century executed on fabric, especially on jusi and pina, and more popularly sought for the Barong Tagalog worn by the Filipino gentleman. Burdang Taal is also done for ternos and gowns and has a wide range of clothing lines from infants to adults, for both the male and female customers. Other fabrics are also used like cotton, linen and ramie. It is also used to accent garment accessories and home décor items.

Taal is known for, Burdang Taal , its fine hand-embroidered Barong materials, pillow cases, bed covers, table cloths and napkins. The finest burdang Taal are found in workshops and stores at Barangay Niogan and at the public market. The most popular embroidered materials are for making the barong tagalog and saya , the country’s traditional costumes for men and women respectively. There is a wide choice of materials from the expensive semi-transparent Piña made from pineapple fibers, jusi made from silk, gusot mayaman from ramie, cotton and synthetic fibers.

Balisong (Butterfly Knives) – This is a another Batangas’ pride. In the Wikipedia, it is described as:  a Philippine  folding pocket knife with two handles counter-rotating around the tang such that, when closed, the blade is concealed within grooves in the handles. In the hands of a trained user, the knife blade can be brought to bear quickly using one hand. Manipulations, called flipping, are performed for art or amusement.

One would usually find Batangas butterfly knives stalls on the highways of Lemery and Taal where one could directly buy balisongs. These knives  are of various sizes, from a key-chain to beinte nueve – (the standard size) up to a garden-cutter size.