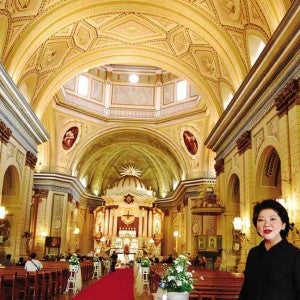 During the ’90s, the Chinese dragon roared, a communist turned capitalist, and invaded the world’s markets. Many small, export-oriented firms suffered losses, and some folded up.

Among those who felt the dragon’s hot breath, copying this and that design, was Misoromo in Parañaque City, managed by entrepreneur Mia E. Protacio and her mother Soccoro Eusebio-Protacio. They were doing well, turning out angels which sold briskly, especially in preparation for the Christmas trade here and abroad.

Then, to their consternation, they  saw many products, cheaper at that, just like their carefully crafted angels, all over the leading department stores. Sales plummeted, Misoromo closed shop, and the Protacios had to raise money just to give their employees separation pay.

Sick at heart, Mia began to question why this had happened. After all, they treated their people well. She was “a good Christian” and all that. Her parents Benjamin and Soccoro comforted her, told her this was all part of the maturity process, and she must start all over again.

And so Mia did, with a vengeance. She turned to decorative lights as a business and, she laughs, “made a deal with the devil,” meaning she was now importing products from China, and  using these lights to enhance visual displays of leading boutiques and department stores.

She created a new firm M-Pro Ventures (www.m-proventures.com) and undertook a more ambitious field—architectural lighting to beautify and enhance major establishments and landmarks. She prepared well for this challenge, taking lighting courses in Florence, Italy, and meeting abroad a manufacturer of special lighting fixtures who set up a factory in Metro Manila.

This the renewed, fired-up entrepreneur uses to customize special lights for churches and other places of worship, museums, hotels, homes, office buildings and special projects like monuments.

Her projects have included the BenCab Museum near Baguio City, the RCBC Plaza in Makati City, the luxurious Amanpulo Resort in Palawan, and the magnificent Taal Basilica in Taal, Batangas (and never mind the modern bell tower—constructed, it is said, by the Department of Tourism—which looks like a biberon, a baby-feeding bottle, according to distinguished glass sculptor Ramon Orlina, who is from Taal).

Mia has worked with and gives credit to top architects like Ed Ledesma of Locsin Architecture, Onglao, Mañosa, Calma and Fr. Alex Bautista, an architect of the Catholic Bishops Conference of the Philippines in charge of church restoration and construction.

Fr. Bautista will be the rector of the St. Josemaria Escriva Parish in Gerona, Tarlac a current project of M-Pro Ventures.

Later this year, the lighting supplier will study advanced lighting in London to keep up with latest trends and technology, especially in church lighting.

“Lighting churches is quite difficult because it takes a lot of humility in doing so,” Mia observes. “It is all about respect for architecture. You are lighting up a place of worship as if there is no light.”

Of all her projects, the San Martin de Tours Basilica in Taal (structure completed in 1865) was the most challenging.

“Lighting is highly visual where there are no hard and fast rules,” she says. “We did not follow lighting places from the consultant. We did a lot of demo and mock-up to finally achieve the desired effect of the rector, Msgr. Fred Madlangbayan, who was educated in Rome and will never settle for anything that’s not at par with the churches in Europe.”

Mia concludes: “It feels good to see a nicely  built home with proper lights, like looking at a pretty face with the proper makeup. But it feels great to light up old churches where everybody can fully appreciate architecture, which means culture and history.”